We bought Boney Barney on clearance three years ago after Halloween. We took him out of storage in 2007, but forgot to set him up with our Halloween decorations, and when we were putting stuff away, he kind of got missed. Happens to the best of us, decorations from holidays past get to sit out all year long. So he sat there in the dark garage off to the corner all by himself.

Then one night it was raining when I got home from work.

Normally I cover my car in the garage because, if I don’t, the cats use it as their personal ski area and hammock, any time of the day or night.

When it rains, I don’t want to get my car cover wet or damp, so I use a car squeegee. I have issues, I know. It’s OK, though, that’s why I’m a member of the Miata Club. I’m validated there. We all clean our cars before we go on runs, but it’s not an uncommon sight to find people giving little details of love to their cars while we wait for the run to start.

Anyway, back on topic. So, one night it had rained and there was my car, sitting there vulnerable to feline abuse. I happened to glance over and see Boney Barney sitting there in the dark. As surely as it happens in cartoons, a lightbulb lit up over my head.

For you see, Boney Barney is motion activated and when he gets activated, he says in a guttural voice the following things:

“Oh my achin’ bones, this after life isn’t what it’s cracked up to be. But I can drink all the antifreeze I want now. Hehehe.”

“Hey, what’d you wake me up for? I was just having the best nightmare. All the cats in the world were turned into zombies and they ate their own litter! *howl*”

“I like to eat bugs & maggots & dead rotting meat, and drink soiled water that tastes like feet, give me a scabby dead rat any day, served up better with stink & decay! *BELCH*” 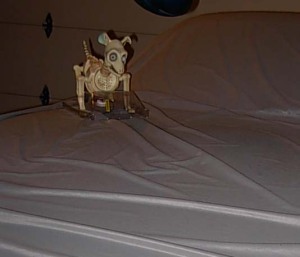 We’ve tried the ScatMats, which I’ve had for years and years (my previous cat was kind of dumb), but these cats of ours have simply learned to stay off the spots the mat is placed, doing the perimeter dance with squinty eyes, leaving lovely tracks in the shape of the mat with their delicate paws. They’ve figured out that as long as they don’t touch ’em, they don’t get shocked.

And so it is that Boney Barney gets a stage for his talents whenever it rains, and lately most anytime. Pretty exciting for just a boney dog. At least he thinks so. The cats aren’t thrilled with it, in fact, they’re somewhat frightened of him. Truth be told, that’s kind of the idea, since they’re not supposed to be on my car anyway.

Earlier this month, Tony called me and with a note of despair in his voice said, “They changed Boney. The ones in the store this year say boring and PC things.” He was so sad, as am I. Because I was planning on buying two more when they went on clearance, one for the trunk of my car and one for the kitchen table.

Filed under I Stimulate the Economy, Kid Substitutes