Back in October of 2005, my dermatologist at the time told me to start using baby shampoo and only baby shampoo. Those instructions were in response to my inflamed scalp, which had become so badly inflamed that it was causing my hair to fall out and my lymph nodes to swell.

I was good. I listened to him. Only baby shampoo did I use for about a year. Then I discovered that if I used Scalpicin on my scalp it would not become inflamed AND I could use other shampoos. Then in July of 2006, I added another bad thing to my hair regiment — chlorine damage — I started swimming nearly every day.

So, I started using various shampoos that professed to remove chlorine. Truly, I don’t know if they do or not. But I also started using hair serum (my favorite of which was John Frieda’s Lite formula) to mask the fact that my hair was super brittle from chlorine exposure. Everyone thought it looked so healthy, except I knew differently. And the lady who trims my hair, she moaned in sadness every time she ran her hands through it… “so beautiful, so dry!” she would say.

Then in May of 2008, I noticed something on my scalp. A mole I thought. Right there in the middle of my part. But it had appeared rapidly and would diminish, then reappear in a different shape. It felt scaly to the touch, and itchy. Uh oh.

I made an appointment with my PCP so I could get a referral to a dermatologist — HMO insurance requires a referral to a specialist. My PCP looked at it and said he didn’t think it was cancerous, but not to be alarmed because to get me to a dermatologist, he had to write “suspicious mole” on the referral sheet. I scheduled the dermatologist appointment to occur just before our Hawaii trip last August, but rescheduled it because I didn’t want to be waiting for biopsy results while on vacation. It was bad enough that my pet fish were dying left and right.

Vacation came and went, as vacations are wont to do, and a couple days before my dermatologist appointment, I reached the pad of my finger up to a feel the “suspicious mole” and it was gone. Totally gone. I hadn’t scratched it, I hadn’t brushed it, but it was gone. Figures, I thought. Just like computer problems, the second you call your I.T. guy, the computer fixes itself. In the second before I pulled my finger away and noticed it was covered in blood, I had pondered canceling the appointment. When i saw the blood, I decided to keep the appointment.

The dermatologist confirmed that it wasn’t skin cancer or anything life threatening. He said it was likely a build-up of irritation and he recommended freezing the spot where it had been to prevent recurrence. Except in those two days the spot had completely healed and we couldn’t really tell for sure precisely where it had been. I declined the freeze and said I’d be back if it reappeared. It hasn’t.

Then I factored in the fact that each time I used shampoo it made my hair feel stripped and brittle, I hated how it felt after shampooing. Then I started to think about the fact that it seemed as if I was using ten products to replace the one thing my hair needs… moisture. All my life I’ve used moisturizing shampoo, moisturizing conditioner, recently adding in hair serum (an oil) for the ends and Scalpicin (for dry scalp). Who says scalp oil is a bad thing, anyway? What if the very thing my scalp and hair needs is being produced by my body?

All of that to say, it just seemed to be a natural step to try the “no poo” thing.

Sunday (5/24) marks one week with no shampoo usage. Tony took this picture on that day. 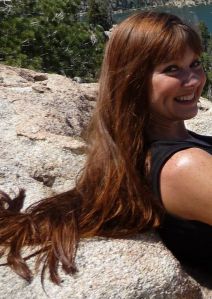 My regimen: Pour one cup of club soda over my scalp, gently rub it in. Use another cup of club soda which I coil the length of my hair into, uncoil it, and then pin it to the top of my head for about 30 seconds. Unpin it and rinse.

I then use a sulfate free conditioner for the scent. Frankly, the smell of my hair is something that my husband loves and having that for him is important to me. Beyond that, I’m not partial to the natural smell of my scalp. It’s not that it’s offensive or bad, it just smells different than what I’ve become accustomed.

My hair looks healthy, but more than that, it feels healthy and softer. I noticed a difference after the very first day… it feels thicker at the scalp, and resists moisture for the first second or so when being rinsed. When I part it, it keeps the part instead of sliding all over the place. Someone used the word “trainable”, and I would agree with that. I haven’t really had what other women experience as far as “oily days” because I’m not training it to expect less cleanings per week. I don’t really feel as if washing my hair less is an option due to the daily chlorine exposure that it receives.

The only bad thing, so far, is my scalp. A couple times it’s started to feel itchy and I’ve had to use Scalpicin for my comfort. I’m trying to reduce my scalp’s dependency on it, but don’t want to end up with an inflamed scalp, hair loss and swollen lymph nodes. That wasn’t fun.

So, one week of the “no poo” science experiment done… so far, it’s all good. I’ll let you know how it continues to progress!

Click to read updates on my “no poo” journey: Link

Filed under Hair Can Be a Topic of Conversation