A Story in Photos.

As many of you know, my husband has taken a second job to temporarily assuage our money hump shortage that resulted from his job weirdness last year. Thus, it was not unusual that I arrived home from work one day last week to a house empty and silent from his extroverted noise-making pastimes.

I set my purse and mail down on the table, and proceeded to empty out my lunch bag. Coffee mug and milk jar in the sink, leftover soybeans that I hadn’t eaten into the fridge. I walked over to my desk to turn my computer on, the thing is now over seven years old and a little slower than it used to be. So it takes a little longer to warm up these days.

I rolled up my desk and was startled to see a box. Like “what the heck is this thing shoved in my desk” kind of startled.

Then I realized, it wasn’t just any box… oh no, this was a box from Hawaii with a Hawaiian newspaper. I’ve mentioned before, but I love opening packages where it’s packed with newspaper from another place. I just think that’s so cool to read about what’s going in another part of the world via their newspaper.

I lifted the newspaper packing material and there were three bags of Hawaiian Coconut coffee. He remembered how sad I had been that the Hilo Hattie’s near us had closed, which is where I used buy that coffee. So he ordered it from the Hilo Hattie’s where we had shopped when we were in Hawaii last August for our anniversary. And he had to actually call them because orders can’t be placed online due to their bankruptcy. 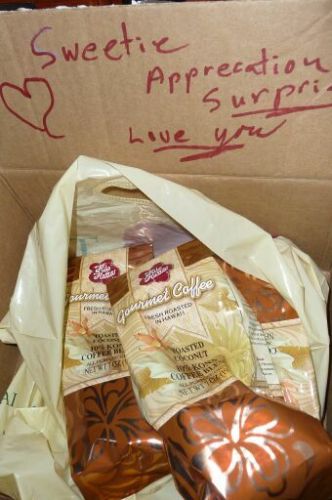 This dear man that I’m married to, who is working so hard at two jobs, went to all that trouble because he wanted to thank me for covering some of his chores here at home.

Sometimes I wish there were a way I could tell this man how much it means to me that he never takes me for granted. That he’s always doing little things to let me know how important I am to him. That he is constantly “plugged in” to our relationship.

Sometimes words just aren’t enough, so I just have to hope that he knows already.