A party for a first birthday?  Really?  He won’t even remember it, for goodness sakes, so just keep it simple if you’re going to have one!  That has always been my thinking.  Plus, I’m not much on social events (hello, extreme introversion!), so a birthday party that I’m in charge of planning sounded like a nightmare to me.  Yet, I was so … reclusive while pregnant, so reticent to embrace publicly the quiet joy I experienced every day while I was carrying this child within me, next to my heart.  Because of that, I kind of felt like I owed it to everyone, not an obligation, really, but more to share this boy who brings so much joy to everyone he sees.  I’ve wondered how weird it would be to add “Joy” as a third middle name, because I don’t think Merriam Webster would be willing to change the definition in the dictionary to read: Joy — (noun) William John.

Then there’s William.  A kid who loves wheels.  I leave for work in the mornings and instead of looking at me longingly as I leave, his eyes are downcast, his lips are smiling, as he looks at the wheels on my car as they turn, and the faster they turn the bigger his smile gets.  We go for walks and he gets upset if we turn around before we get to the main street, because he can hear those wheels driving by on the street, and he wants to see them!  If a truck goes by, “Oh, WOW!!” he says.  His head turns, eyes tracking them.  Trucks have really big wheels, you know?

I wasn’t really looking, well, not looking very hard, I guess I should say… when I came across The Perfect Invitation.  “No way!” I said to Tony when I found them.  “Check these out!  Should I order them?” I asked.  Wheel Have Lots of Fun!  Cute and cheesy and sooooo William.

So we confirmed the date and time, and I ordered them.  Embrace it and own it, I decided.  So, I browsed the Internet for food ideas.  Hostess Ding Dongs were going to be “spare tires”, but then Hostess went into bankruptcy, and suddenly there was a shortage of Ding Dongs (who would’ve thought??), so Oreo cookies became the spare “spare tires.”  Pretzel rings became “bicycle tires.” Pinwheel sandwiches, or wraps, were next… Costco would have been the easy thing to do, except I don’t care for cream cheese with deli meat, I much prefer hummus.  Costco wasn’t able to modify their recipe (yes, I asked).  I would have made the things myself, except I was already doing the cakes (see the next paragraph), so I called around and found a grocery store who would custom make them for the same price.  Various other “wheel” shaped foods made it on the menu…

The cakes should have been the easy part, right?  I mean, cake pans are generally round.  The problem was, I’m not a huge fan of cake, especially the ones that have sugary frosting.  Yet, what’s a birthday party without cake???  So, I decided to take a day off from work and bake all the guests their own individual mini pineapple upside cake (aka “Tractor Wheels”).  Crazy much?  (Reminds me of a woman who was 7 months pregnant and stayed up all night before her baby shower baking cookies for her guests when she was supposed to be taking it easy, because she’d just been in the L&D unit for having contractions!!  Hi!! *waves & grins*)

For William, I decided that a smash cake wasn’t a smash cake unless it had frosting, and since his favorite fruit to date was banana, I made a sugarless banana cake sweetened by apple sauce, and the frosting was Cool Whip with a banana mixed in for flavoring, and colored with blue food coloring.

For kid entertainment, Tony found a great deal on the internet for a bouncy house, and after a couple of foibles on their part they threw in a Cars banner for free.

We asked William’s cousin, Huck, to accompany us on the piano when we sang “Happy Birthday,” and he did an amazing job!  He even played it again later so we could hear him better.

Oh, and all the guests were required to take their picture with the race car upon entering the party.  Which meant that someone had to stand out there and greet everyone, which actually turned out to be a great idea, because Tony’s parent’s house is kind of hard to find if you’ve never been there before.  Turns out, a birthday party greeter is a great ice breaker!  Plus, the pictures taken are a great keepsake of all the people who were part of this celebration to show him how thrilled they are that he’s been in the world for an entire year. 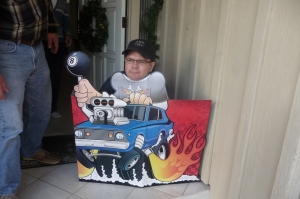 I know I’ve said it again and again, but this child is such a blessing.  Even though I know he won’t remember it, I realized that we will.  And this?  This was a great memory. 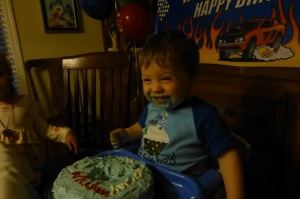 Special thanks to my friend, Grace (William’s Godmother), for taking her Saturday morning and spending it setting up for the party.  Tony also was an enormous help in coordinating things and helping set things up.  Tony’s mom also helped set up and frosted William’s smash cake.  Tony’s parents provided the party venue.  Thanks to his cousin, Huck, for playing Happy Birthday.  I’m also so grateful to all the guests who celebrated with us.

Filed under Best Husband, I did something Special, I have Friends, Our Kid is Cute