In a previous post, I shared one of the funny moments that happened late in our vacation while it was still fresh in my mind. I also shared some tidbits of things we did while on vacation in William’s monthly post. I wanted to share an overview of all the things we did.

Our airline experiences this time were much better and on par with what I expect from Southwest Airlines. We managed to rack up $400 a person in complimentary vouchers from Southwest for the shoddy way they treated us last October, and those vouchers mostly funded our trip to San Francisco the end of May and our trip back to Nebraska. Sadly, since they did so well, that is the end of our free ride. Thank you, Southwest Airlines!

We stayed with my dear Aunt Marjorie (paternal side) for a few days while we visited the Omaha Zoo and Lauritzen Gardens again. We had visited those places last October, but our gardens visit got cut short due to a fast moving rainstorm. They have a model train garden that is quite amazing to watch, it’s so detailed! So we visited that again, and also walked up to see the two real-size, huge, famous engines they have on display.

We were well pleased with our visit to the zoo last time, except they had ended the season of camel rides and their train wasn’t running the day we went. This trip it was overwhelmingly hot and humid. While the weather wasn’t necessarily a surprise, it was challenging for me (us?) because we’re used to California’s weather. Sadly, I wilted quicker than I expected in the heat. While at the zoo, We managed to meet up with some friends, a lady I know from an online Facebook group (and her family). Fortunately, they were willing companions for our agenda and didn’t protest when we suggested going and getting lunch. She had her two boys with her, the older of them shares a birthday with William. William LOVED meeting him and I loved hanging out with her. Tony pretty much gets along with anyone, and her husband was great to converse with. So, we kind of went to get some lunch and then just never stood back up again until it was time to leave. 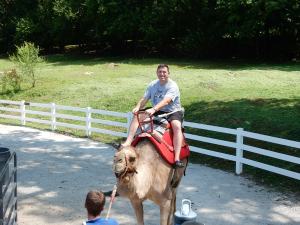 The timing of our trip was stipulated by a family gathering that happens annually the last Sunday of July in Albion, Nebraska. So, we did a road trip from Omaha to the middle of Nebraska, a two hour drive made longer by construction and ill-timed traffic lights on a timer in the middle of nowhere.

My uncle (maternal side) graciously hosted us in their basement, which was blissfully cool and mostly comfortable. They are gracious hosts and very accommodating to quirky travelers. I highly recommend them. I just love staying with them on their farm. They have animals galore… cats and kittens(!!), dogs, horses and ponies, goats, guineafowl, cows, and… I’m sure I’m missing naming a species here. Also, my cousin has two girls and William just loved playing with them! 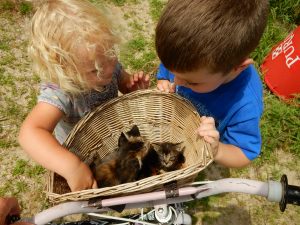 The drive to the family gathering was mostly on dirt roads, which William thought was fabulous thanks to the off-roading scenes in the Cars movie. It was made more entertaining for me by texting with my cousin, who was in the vehicle in front of us. She acted like a tour guide with such things like, “This is corn fields on your right and soybeans to your left. Upcoming to your right is a house where no one famous lives.” She would switch the types of fields appropriately. As we drove, we passed a farm that had a bunch of old buildings on it. There were a couple of churches, a sheriff building, and other things. It looked like a little Western town. I later learned from my uncle that the owner of that farm had a vision of building a little town, but he passed away and now his family doesn’t know what to do with the buildings. I guess his vision isn’t theirs.

At the family gathering, the couple who hosted it are 2nd or 3rd cousins, once removed, to me, I think. I’m not really sure. Anyway, they have grandkids around William’s age, and while the kids weren’t in attendance, their toys were. William and my cousin’s girls had a fabulous time playing down in their basement. They have a pool table down there and William loved putting the balls in the holes and then listening to them rumble to the end. Best kid entertainment ever! I enjoyed seeing one of my cousins who I haven’t seen since he was 6 or 7 years old, and meeting his wife. There were also other distant relatives there and it was just an enjoyable relaxing time. The food was set up buffet style, entrees on one side of the kitchen island and various “salads” (the notion of salad is very different in the Midwest vs. California) on the other side. Also, desserts.

The days went quickly (surely a sign of a good vacation?) and before we knew it, we were headed back to Omaha to stay with my Aunt Marjorie one last night and catch our flight the next morning. Now… where do we go next?

Filed under Best Husband, I did something Special, I have Family, I have Friends, I Left Home for Awhile, Our Kid is Cute

One response to “More About Last Month’s Vacation.”