Last night was William’s first Awana Club meeting. Awana Club was something that my brother and I did when we were kids, we pretty much grew up in Awana Clubs, attending every week, and earned our trophies. I loved the meetings… the games, playing with other kids, even the Bible memorization. It was just so much fun. I hope William ends up liking it as much as I did.

My mom, being experienced in teaching, mentioned to me that as it was the first night it might be a little disorganized. I was glad later that she had mentioned that, because it helped prepare me for the state of disaster that it actually turned out to be. To start, the room was locked. It then progressed to the leader trying to give parents an orientation while 10 kids (ages 3-4) sat at a table with nothing to do. When that didn’t work, the leader gave them their book bags to paint, except the paint markers still had the plastic wrapping on AND the internal stopper. Confusion reigned, and most of the kids had paint all over their hands, so they had to wash them (10 little kids to one tiny sink). They finally went out to the tot playground while the leader “prepared” a snack of half a hot dog/bun and Cheetos (of all things, really?), but she didn’t have plates, cups or a knife to cut things in half. Then the kids had to come in from the playground (but line up first!) and wash their hands again (10 little kids to one tiny sink). And that was it. As William pointed out when we got to the car, “We didn’t get to hear a Bible verse or read a Bible story… or play a game.” Yeah. Kind of the foundation for the whole thing, that Bible verse.

When I saw the issues they were having, I tried to help where I could and quietly made suggestions to the leader, but I felt like it wasn’t enough. So much of the stuff actually needed far more advance planning, i think. Maybe even making one of the crafts ahead of time to troubleshoot problems and then to use as an example for the kids. Awana Club is such a great resource; I pray that next week, and the weeks to come improve. 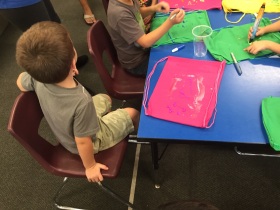 The quote of the night from William. After he’d finished painting his bag and declaring repeatedly and emphatically, “I’m done!” one of the helpers took his bag. He watched her with great concern, and seeing his concern, she explained to him, “I’m taking this outside for some air.” He replied, “Well, there’s air in here. That’s how you’re breathing.”

Yeah, air, kind of one of the most important parts of breathing.

Filed under I did something Special, Our Kid is Cute