The quiet and peacefulness of the mountains is one of the biggest draws for us… even with a 2 year old in tow. It helps that William requests to “go to Big Bear” and seemingly gets more excited about going up there than we do. We also enjoy our Saturday morning breakfast restaurant, the people there are like visiting family. Sometimes I can hardly sleep the night before, just because I know we’re gonna get to see our friends there. We enjoy our routines, what can I say?

Never before, in all the 40-some years that Tony’s family has owned the property, built the cabin, have they experienced such a weird thing as we did this weekend.

We drove up Friday morning and spent the afternoon settling in. William had some trouble sleeping that night, so it was that around 2 AM Saturday, Tony was sleeping lightly and heard a car door slam out front.  He thought it was the neighbors across the street, since they had rented the place out for the weekend.  We were surprised then, to look out our window Saturday morning to find a strange vehicle parked within 5 feet of our front door, directly under the window of the room where we’d been sleeping. Thinking it belonged to the neighbors to the left of us (a rental cabin), we knocked on their door and windows, but no one was there. We checked with the neighbor to the right, and he didn’t recognize it. I suggested that perhaps it was a stolen vehicle, and so Tony called the police. They said it hadn’t been reported stolen. Since it was early yet, and we really didn’t want to pay to have the thing towed, we decided to let a little time pass and go to breakfast.   Plus, you know, priorities.  Food vs. intruding car?  Food wins every time.

Five hours later, we returned to our cabin. The vehicle was gone, and in its place was a Sheriff’s car. The officer was dusting items on our porch for fingerprints. He said the vehicle had indeed been stolen, and the items he was dusting had been inside the car and not belonged to the owner. According to the Sheriff, there have been a bunch of break-ins and car thefts in that area the last month or so. Turns out, the car’s owner lived just a couple streets down. She had trustingly left her car unlocked with the keys in the ignition, thinking it safe within her gated yard. She didn’t even know her car was gone. Her sister drove by and recognized the car!

Then, driving home Sunday morning, we had grabbed some food at Carl’s Jr., eating our food, we got back on the road.  Tony had been staying with the flow of traffic while he ate, and just finished his burger. I was alarmed when he said we were being pulled over by a motorcycle cop. We truly wondered why?  Talk about making your food turn into a brick in your stomach! We made our way off the freeway into a deserted bank parking lot.  I suggested that Tony roll down William’s window, too, so he could see the officer and maybe the officer would let us off because our kid is cute. What? It can’t hurt, right? Ha. The officer claimed we had been speeding in a construction zone on the freeway.

Apparently, even if it’s a Sunday and there’s no active construction going on, and we were being passed by other cars, it’s still a construction zone and can be used as a speed trap. The officer collected the information:  license, registration, proof of insurance, said he’d be back in a couple minutes.  A few minutes passed, the officer returned, handed all the stuff back to Tony and said, “I’ve received another call and have to go. Please drive safely and watch your speed.” Knowing firsthand, and recently, that speeding tickets are around $300, double that for construction zone, plus traffic school, all I could think was, we were just spared spending $700.

But, you know, despite the couple of strange things happening, we said hi to “Baby” the donkey, we saw snow (a tiny bit in front of our cabin and way far off on the mountains), we had our breakfast and saw our friends, we laughed and relaxed and enjoyed each other’s company. William got a tour of a fire truck, a tour of a sheriff’s car and visited a playground. What more could we have asked for from a weekend in the mountains? 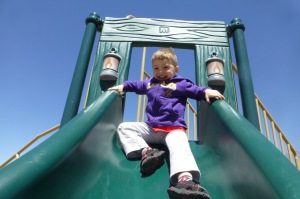 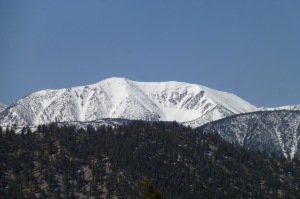 Filed under Best Husband, Entertainment can be Cheap, Our Kid is Cute

One response to “Mountain Weekend.”