This past week we had Thanksgiving, your first.  It was pretty special, because on Thanksgiving we’re supposed to focus on the good things in our lives — whatever things or people we find to be a blessing or an encouragement — and then we eat a bountiful feast with our loved ones.  We visited your father’s parent’s house.  All of your living grandparents were there, as well as your cousins, Huck and Milo.  You had a fantastic time playing with your cousins, and they acted as your own personal entertainment.  They danced for you, talked to you, chased you, even built you a fort out of the couch cushions!  You thought they were pretty funny and spent a lot of time either watching them, open mouthed, or laughing at them.   You were having such a good time!  The afternoon moved into the evening and the time we should have left to get you home for bed came and went, and I knew there would be a price to pay, likely in the form of a meltdown when we got home, and likely an additional night waking, but I let you stay up past your bedtime.  Both “prices to pay” came true, but after your 2nd wake up, you ended up sleeping until nearly 8:30am the next morning.  Shocking! 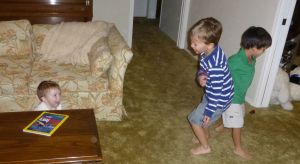 Some of our neighbors have put up Christmas lights, a lot of people start decorating for Christmas on Thanksgiving.  Your father suggested we take you over so you could see the lights, we wanted to see what you thought before we made arrangements to walk through some extravagant neighborhoods in the month of December.  You looked, your eyes open wide and I could see the reflection of those Christmas lights in your eyes.  You smiled and said, “Wow.”  Just like that, you summarized what reporters try to say, using hundreds of words, about Christmas light displays.  I guess we’ll be going to those extravagant neighborhoods.

Foods:  Since you were 11.5 months, I decided to also let you partake in the Thanksgiving feast (with the exception of the really sugary foods) — just like the little human you are.  Over the months of eating, you’ve sampled most of the foods that were served, although a new one this week was cranberries.  You weren’t terribly fond of the surprising tartness of one of the berries, but as is usually the case, despite the scrunchy face you kept going back for more.  Also, this week, your father and I had buck-fitty hot dogs at Costco, since I refuse to let you eat that crap (ha), I let you instead have some raw onion pieces.  You juiced them, like you do most of your food, and I sat there all proud that my baby boy loves onions, just like his parents do.  I also froze a mix of bananas and plain Greek yogurt in smaller “rocketship” popsicle molds, instead of the bohemoth molds you’ve been eating from that I used last year for myself.  Fortunately, as I prefer you to hold your own food (nobody puts food in baby’s mouth but baby rule) these are more your size and so you can hold them all by yourself, which thrills me and thrills you even more.

Developments:  You are weighing in at 28 pounds 1/2 ounce, 31 inches tall.  You are wearing 18 month sizes, some 24 months.  Diaper stuffing, I mostly double stuff your diapers these days, especially since you’ve been loving nursing.  We measured you for shoes, and you wear an Infants size 6, Extra Wide.

Steps!  You are taking one step here, one step there, carefully and cautiously.  You took one step one night, then the next night you took 2.  The next night you took 3.  Working your way up in number, slowly but surely!  So exciting and so bittersweet all at the same time.  Then, last night, you took 5 little controlled baby steps, while saying “Ball! Ball!  Ballllll!”  Even timing your speaking with your steps, which makes me think that since you’re talking and walking that it should count for even more!   http://youtu.be/fBDOPmkpGIE

Bath time, you love naked crawling … one night this week, though, we let you loose for your naked crawling time, and you crawled up and down the hallway once, and then crawled right into the bathroom and stood there by the side of the tub looking over your shoulder at me, waiting for me to lift you in.  I let you play in the bathtub sans water this week, while I folded laundry sitting there watching you.  You had a grand time, so maybe that play time has increased your bath time comfort level? I noticed this week when I rinse your hair, you tilt your chin to your chest, so you get less water in your eyes. Smart kid.  Then you like to lick the water as it comes by your mouth.  Better than dipping your face in the tub, I say.

Wednesday night, it was the funniest thing, your pant leg had ridden up on your calf, so I reached over and tugged it down.  You were standing there, busy playing with the magnet on the refrigerator and you stopped, looked up at me, quirked a smirk, sat down and reached down and deliberately tugged the pant leg back up, then stood up and grinned at me, quite pleased with yourself.  Smarty pants. 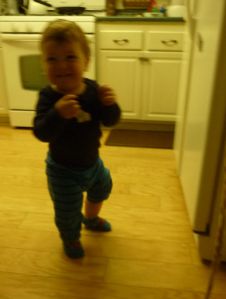 Teething:  You are teething again.  You’ve had some really tough times this week when the pain is getting to you and you just stop playing or whatever, and scream/cry. You bite Froggy, you bite your popsicles, you even bite your hands and wrists leaving teethmarks on yourself.  It’s so sad.  Although when you’re teething, your latch gets a little pinchy, thankfully you don’t bite me anymore.   I think it’s probably your upper two bilateral incisors, because when you’re teething the upper teeth, they seem to hurt you more than than the lower ones… Tylenol, or as we call it, “medicine” is your friend.

You have started to multitask while nursing… it started with a spinning toy I bought you at Walgreens.  One presses a button and the insides of this toy lights up and spins.  You love the thing and wanted to nurse but didn’t want to let go of it.  So, you nursed and pressed the button, watching the thing light up and spin.  http://youtu.be/lCjwoOmc49w

Sleep:  Your sleep has been great this week.  Wakeup around 6:30am, sometimes later.  Nap have been good, over the holiday weekend you were back and forth between 2 naps and 1 nap.  Bedtime around 7 to 7:30pm.  I’ve been pushing our overnight nursing back to around 4am.  I’ve been toying with weaning this nursing, meaning that if you don’t wake for it, I won’t dreamfeed you, but I’m not ready to do that yet.  I promised myself I would keep it until you were a year old, for several reasons — it keeps my supply up; it keeps my period from returning; it’s less milk that I have to pump during the day; it’s precious time holding you that I don’t get otherwise; and it allows me to check on you in the middle of the night to make sure you’re OK.  The only benefit I would get from NOT doing it is uninterrupted sleep.  So we continue on.

In addition to being enamored with Asian people, you have added elderly people to your list of preferences.  You will spot an elderly person out of a crowd, focus, and draw them in with smiles and laughter.  Fortunately for you, old people like babies.  We were in Costco this past week and you did this to a nice elderly lady, she was IN LOVE with you and even asked if you were like this all the time (yes!) and commented that we are so blessed (yes, more than she can imagine).  She was so tickled to be grinned and laughed at by you.

Things I want to remember about you this week:  How you and I went for a walk and ended up at our neighborhood park with “big kid” swings.  I wanted you to swing, but it wasn’t safe for you to do so by yourself, so I held you and we did the swing thing… you thought it was great, laughing and snuggling with me.  How I took you to the ocean for the first time to watch the sunset, and you were a little scared of the enormity of the ocean, but were fine as long as you were close to me.  How you wanted to nurse so much over the Thanksgiving weekend that I was taken back in my mind to when you were a newborn.  It was time consuming, but that’s OK, because it reminded me to slow down and enjoy the closeness with you.  How your father babyproofed his XBOX, building a box around it with a hole in the wood for his controller’s signals, and the first thing you did was to poke your finger in that hole.  How I learned that when driving you around when it’s dark outside it’s best to leave the dome light on so that you can see me, otherwise you spend the entire drive fussing and crying.  How you initiated an elaborate game of peek-a-boo while we were driving home one night that went on for about 15 minutes, you pulled the hat I wasn’t wearing over your face and hid and then after a minute (literally) of hiding, you lifted the hat and grinned at me waiting for me to acknowledge you. 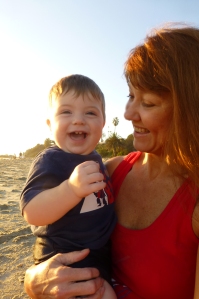 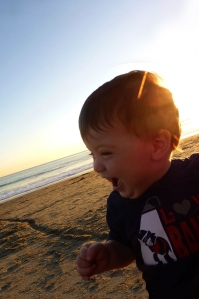 And so the holiday season has begun.  The weather is getting chilly again.  As I brought out my winter pajamas this week, I realized that the last time I wore these jammies was last year when I was still pregnant with you and then when you were a newborn.  And so when I hold you close when you’re nursing, I’m feeling a lot of nostalgia for that time when you were so small that I could nurse you and you still fit on the nursing pillow without having to cross your leg and hold one knee up.  There was one morning this week when your father was still in bed and so I brought you in there instead of nursing you straightaway.  You melted into his arms and tucked your head in his neck and you and your father snuggled quietly.  I took a picture, and I look at that picture and while it’s not perfect in lighting or composition, it’s perfect in the emotions revealed. 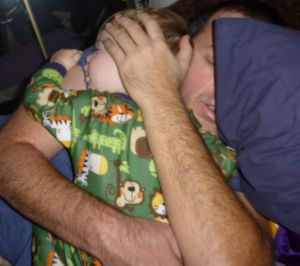 This year, I am so thankful that you are here so we can make memories such as this, in the quiet stillness of the early morning hours.  The bliss of love from the protector of our family, to the innocence of you, our son. 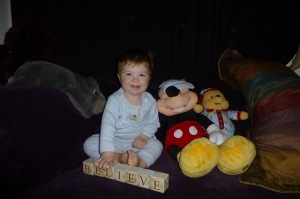 Filed under Letter to William, Our Kid is Cute