A random something that I think about every time I watch a parade is how difficult it is to get a good picture of it.  They never look right. There’s always too much in them, which makes them too busy, which means you just don’t know where to look.

When I’ve gone to the Rose Parade in Pasadena, the floats I photograph look flat and uninteresting, yet the reason I took the picture is the exact opposite, I thought the floats were amazing and beautiful.  City parades are the same, although I’ve come to realize that city parades are really just local businesses advertising themselves while riding in the back of a pick-up truck waving flags.

Disneyland’s parades are even more busy, MORE lights, MORE people, MORE things in the picture.  What were we looking at?  Where did it go?  And the electrical parade is at night, so even more tough to take a picture of.  Plus, I think at least half of the experience at Disneyland’s parades is their music, which of course you can’t capture in a picture.

Is it just me?

Pictures are original content from the Pasadena Rose Parade, circa 1983 or 1984… a unicorn float, a smurf float and a cottage float. 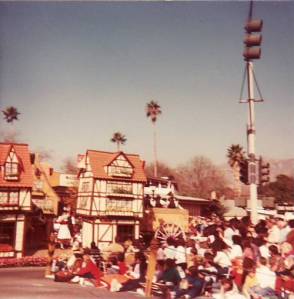 Comments Off on Parade Musings.

Filed under Tidbits, Weird is Fun