For the holidays, I like to do something special, something out of the ordinary, something that is IN YOUR FACE “Christmasy” every year.  One year we saw a handbell choir, gosh, that was so beautiful.  Unfortunately, it appears that we saw them the last year they were performing and handbell choirs, apparently, are as rare as a Hawaiian surfing in Alaska!  Our standby Christmas thing has always been the local historical city park.  They have two events every year — a candlelight tour one weekend and a Victorian Christmas celebration the next — but our calendars just didn’t match up with theirs this year.

I was blessed to be able to participate in my company’s holiday party this year.  The first year I worked here, they didn’t have a holiday event.  The 2nd year I was here, I was out on maternity leave.  This year, they rented a yacht and we floated out and toured the harbor while eating our lunch.  They even accommodated me with a special room on the yacht, with its own bathroom (you know how I love bathrooms!) to pump milk for my son so I could participate comfortably!

But I was still looking for something special to do with my family.  So when a special deal came across LivingSocial to go to the Queen Mary for the holidays, The Queen Mary Chill event, they called it, well, I was ALL over that!  Beyond thrilled, actually, because they had an ice sculpture display and I was extremely disappointed that the state fair didn’t have their Ice Museum this year.  But a holiday themed ice sculpture display?  Even better.  Made up for the state fair’s epic fail 1,000 times over. 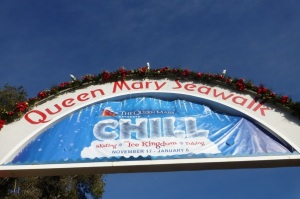 It was an amazing day.  I left our home early this past Saturday morning to drop my car off for the last free oil change of the year (huzzah for free — remember that coupon I talked about awhile back?).  Then, I timed it just right, and walked out to the main street (saving us 5 minutes of driving time) and hitched a ride with Tony in his car as he was zooming to the freeway and off we went to have breakfast with my friend, Grace, and her family.  Such a blessing (always) to see her!  (Love you, Grace!)

After that we headed up to the Queen Mary!  To see her decked out in her holiday finery was a sight to behold.

The Queen Mary also has a village that they “dress” for the appropriate holiday season, and it was fun to mosey around the village and reminisce about the last time we were there… for Halloween last year.  William got a visit in with Santa (another post is in the works for that story), and then we headed into the dome to view the ice sculptures. Everything you see in the picture below, the wreath, the sign, it’s all ice.  Amazing. 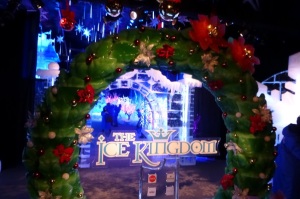 William’s nap was the only hangnail in this whole story, one which I’m still suffering from mommy guilt about.  He fell asleep at the appropriate time, but when I attempted to transfer him to the stroller he woke up.  Tony resorted to our standby of wearing him and, after much protesting, William went to sleep and ended up sleeping through our foray through the ice.  Maybe for the best, since it was really, really cold in there.  Tony got a talking to by one of the employees because of his lack of appropriate footwear.  Yes, seriously.  This man, who wears flip flops in 6′ snow banks, was duly informed that he was causing a liability and that it was a health hazard.  So he was asked to leave the exhibit.  Kind of silly, given that we were just a few displays away from the exit door, but, you know, whatever.

Of all the displays in the exhibit, the best and most beautiful one, I think, was the nativity scene.  I’m a sucker for nativity scenes, anyway, and particularly the glass or crystal ones.  And this one was huge and stunning…. and was the last one to see in the display.  Despite the coldness, it left me feeling warm and happy inside. 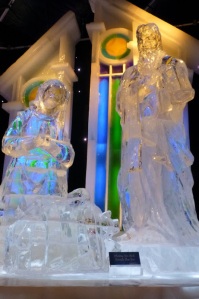 This is an event that I would definitely attend again sometime in the future.  If you’re interested, more pictures from our adventure can be seen here:  LINK

Filed under Best Husband, I did something Special, I Left Home for Awhile